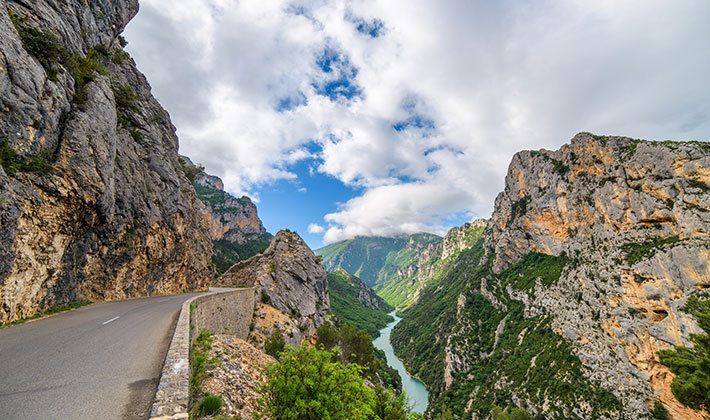 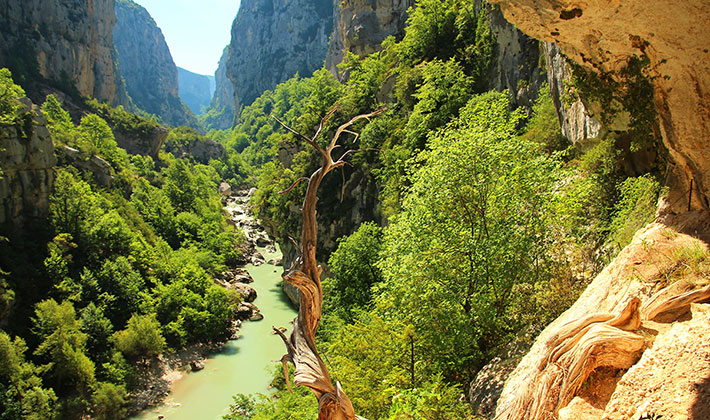 It is located in the midst of the region of Provence, Alps and the French Riviera, crossing over the departments of Var and the Alps of Upper-Provence and two hours away from Marseilles.

A long side time this road developed from a place under sea to the gorge it is today. During the Triassic period, the French region of Provence subsided and was covered by the sea, leaving thick layers of various limestone deposits. Several million years later, with the arrival of the Jurassic period, the area was covered by a warm shallow sea, which allowed the growth of various Corals. The Cretaceous period saw what is now Basse Provence being raised and the sea reaching the current location of the Alps, which were themselves erected during the tertiary era. As a result of the large-scale geological activity, many of the Jurassic limestone deposits fractured, forming relief with valleys and other such features. The origins of the Verdon Gorge can be traced to this era. The dawn of the Quaternary period had large-scale glaciation, transforming water pockets and lakes into unstoppable rivers of ice, which remodeled the topography, scouring and changing the landscape. At the end of this activity, erosion by rivers continued, forming the Gorge as it is today. The gorge was described in printed form from 1782 and 1804. By the second half of the 19th century, it was featured in French tourist guides. According to Graham Robb's book The Discovery of France, the gorge did not become known outside France until 1906. 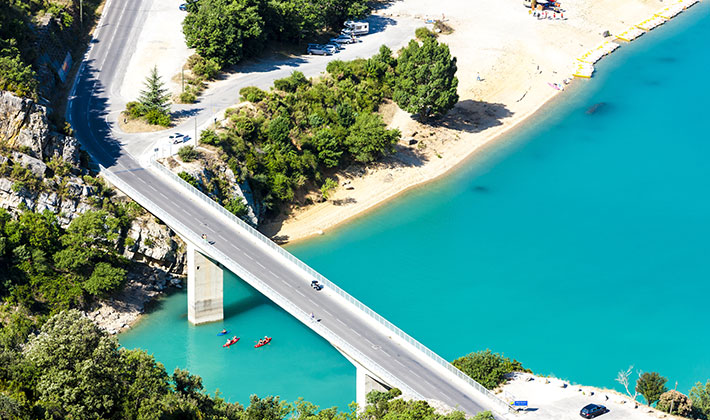 The Gorges Du Verdon, in south-eastern France, is a river canyon that is often considered to be one of Europe's most beautiful. It is about 25 kilometers long and up to 700 meters deep. It was formed by the Verdon River, which is named for its startling turquoise-green color, one of the location's distinguishing characteristics. The most impressive part lies between the towns of Castellane and Moustiers-Sainte-Marie, where the river has cut a ravine to a depth of 700 metros through the limestone mass. At the end of the canyon, the Verdon River flows into the artificial lake of Sainte-Croix-du-Verdon. Because of its proximity to the French Riviera, the gorge is very popular with tourists, who can drive around its rim, rent kayaks to travel on the river, or hike. The limestone walls, which are several hundreds of meters high, attract many rock climbers. It is considered an outstanding destination for multi-pitch climbing. This region between Castellane and the Lac de Sainte-Croix is called the Gorges du Verdon, or Verdon Gorge. It is split into three distinct parts: Pregorges-from Castellane to Pont de Soleils, the deepest part of the Gorge, from Pont de Soleils to l'Imbut and he Canyon from l’Imbut to the Pont de Galetas. On this route there are a few lakes with a breathtaking view such as Artignosc Lake, Castillon Lake, Esparron Lake, Quinson Lake and the Lake of Sainte Croix. Sainte Croix Lake was created in 1973 after the dam of Sainte Croix was built. This true Verdon's pearl is also extremely well located, at the center of the natural park. 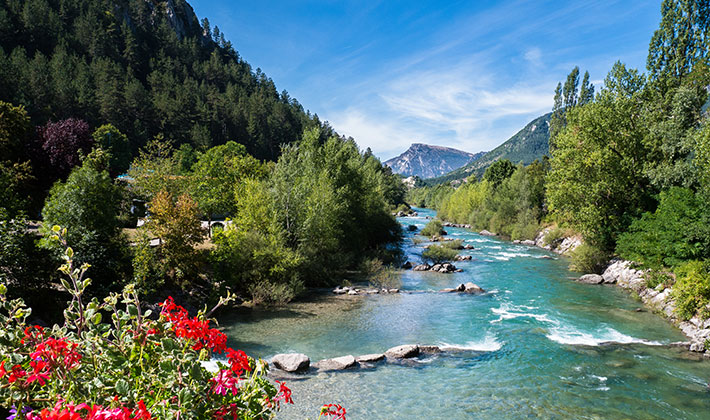